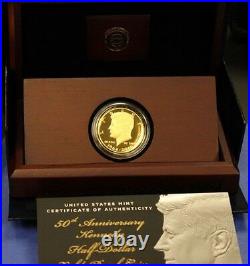 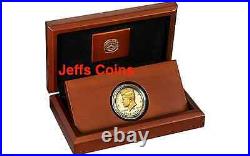 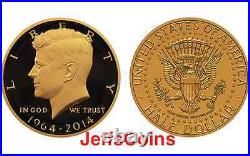 Listing is for a. W Mint Gold Proof. 3/4 ounce 2014 Gold Kennedy Half dollar. These coins were only available on a limited sales basis in 2014 and 2015. The coin will be in the. Original mint display box with COA. This is a beautiful way to own valuable 24K Gold in a limited issue 1964 to 2014 anniversary coin. This beautiful coin and display box form always adds numismatic and display value to the gold content. Second image represents front and back of image of the coin. This is a very unique 24k gold coin with big demand coming from high grade Kennedy coin collecting fans everywhere. Total year’s production of. All the Gold Baseball Coins within the first 24 hours. Mited production of this Kennedy gold proof. And high demand, you need to act now to be one of the first to own this very exclusive coin. We work quickly to deliver all our pre-sale and subscription clients with the coins they want from first strikes. JeffsCoins offers value added services for those who wish to obtain coins with: special packaging configurations, professional grading services and highest certifications not available from other sources. Coin is a proof, composed from 24-karat gold and comes from the West Point Mint bearing a W mint mark. Unlike the others, this coin has the dual dates of 1964 and 2014. See West Point Mint history information below. These Coins were to be released on August 5th 2014. The Mint sales were put on hold after 2 days, demand was excessive. We stood in line for the first two days of ANA release of the coins and we continued to receive coins during the following months. We are offering professionally graded Kennedy coins also, so deliveries of ungraded coins on this listing will vary with availability. Be aware that PCGS holder coins (links below) will be the harder ones to obtain in Proof 69 and 70 certification “ANA Release” coin holders. Our investment grade PR69 and PR70 are hard to obtain in the PCGS holder. We were only able to obtain a limited number of PCGS Proof 69 Baseball and US Marshal gold coins out of our many grading submissions. The new Kennedy gold coin on this listing ha s not been graded. Jeffs Coins received these issues directly from the US Mint at the opening day ceremony. Additional limits were imposed by the US Mint; restrictions outside of our control. The final look of the Mint package is show in Gallery sample image K15 above. 2014 W Gold Proof Baseball Coin. 014 W Gold Uncirculated Baseball Coin. PCGS Proof 70 Kennedy Gold. 9999 14K Gold DCAM. All 2014 P D Presidential Dollars & Sacagawea Harding. To FDR 10 Coin Subscription. 2014 P D Presidential Dollars Harding Coolidge Hoover. Roosevelt 8 Coin Subscription. 2014 S Mint Proof Coins Early Release. 2014 S Proof Nickel. 2014 S Proof Dime. 2014 S Proof Quarter Great Smoky Mountains. 2014 S Proof Kennedy Half Dollar. 2014 S Proof Lincoln Shield Penny. 2014 S Proof SHENANDOAH National Park QUARTER Virginia. 2014 S Proof ARCHES National Park QUARTER Utah. 2014 S Proof GREAT SAND DUNES National Park QUARTER CO. 2014 S Proof EVERGLADES National Park Quarter Florida. 2014 S Proof Warren Harding Presidential Golden Dollar. West Point Mint Facility. Located near the U. Military Academy in New York state, the United States Mint at West Point manufactures the entire family of American Eagle proof and uncirculated coins in gold, silver, and platinum. The gold and platinum coins are manufactured in denominations of one-ounce, half-ounce, quarter-ounce and tenth -ounce. Silver bullion coins are manufactured in one-ounce denomination. Historical Background: The’Fort Knox of Silver’ and the Newest Mint. The West Point Mint produces gold, silver and platinum bullion coins. Erected in 1937 as the West Point Bullion Depository, this was originally a storage facility for silver bullion and was nicknamed The Fort Knox of Silver. From 1973 to 1986, West Point produced cents, and in 1980 began striking gold medallions. Shortly afterward, approximately 20 billion dollars worth of gold was stored in its vaults, making it second only to Fort Knox for gold storage. Today, it is also the major producer of gold coins. The red letter date for West Point was March 31, 1988, when it gained official status as a United States Mint. Today, it is still a storage facility, but also manufactures, packages and ships gold and silver commemorative coins, and American Eagle Bullion coins in proof and uncirculated condition. Its Platinum Eagles have been very popular since their first issuance in 1997. In 2000, it struck the first ever Gold and Platinum Bi-Metallic Coin. Because of its extremely high security, the West Point facility does not offer public tours. Jeffs Coins information source is the US Mint. The item “2014 W Kennedy Gold Proof Half Dollar Anniversary Chicago ANA Release K15″ is in sale since Wednesday, July 23, 2014. This item is in the category “Coins & Paper Money\Coins\ US\Half Dollars\Kennedy (1964-Now)”. The seller is “jeffscoins” and is located in Oakton, Virginia. This item can be shipped to United States.