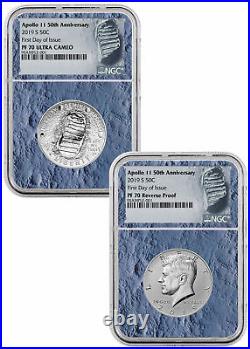 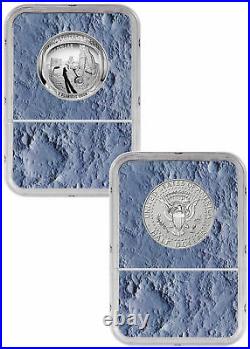 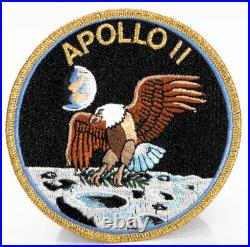 MCM Picks: Memorial Day. 2019-S Apollo 11 50th Anniversary 2-Coin Commemorative Clad Half Dollar Proof + Enhanced Reverse Proof Set NGC PF70 FDI With Apollo 11 Mission Patch Moon Core Holder SKU56551. Why order this 2-Coin 2019-S Apollo 11 50th Anniversary Commemorative Clad Half Dollar Proof Set? On July 20, 1969, Neil Armstrong took One small step for man; one giant leap for mankind. Fifty years later, the U. S Mint is celebrating that event with this 2019-S Apollo 11 50th Anniversary Commemorative Clad Half Dollar Proof set that honors both the first Lunar Landing, as well as the role that Former President of the United States, John F. Kennedy took in the revolutionary event. The 2019-S Apollo 11 Commemorative Clad Half Dollar is part of a series that features just the second domed products ever produced by the US Mint. The other part of this set is a Kennedy Clad Half Dollar Enhanced Reverse Proof coin. Both were struck at the legendary San Francisco mint and carry the &#####x201C;S&#####x201D; mint mark. Part of a limited mintage of 100,000 units, this set is perfect for anyone who is looking for inspiration, as well as patriotic Americans. Patriotic Visor Reflection Design. The Apollo 11 Commemorative Half Dollar in this set, features the design that all of the coins in the U. S Mint&#####x2019;s Apollo 11 Commemorative series share. On the obverse is a simple, yet powerful design by Gary Cooper. It features a single footprint on the lunar surface under the names of the three NASA programs that led up to the lunar landing, “MERCURY, ” “GEMINI, ” and APOLLO. Depictions of the moon in various phases join the names of the programs. “IN GOD WE TRUST” and “LIBERTY” are among several other obverse inscriptions. The reverse design was taken from a famous photograph of Buzz Aldrin’s helmet during the moon landing. The convex design is meant to replicate the look of the helmet. The largest portion of the helmet is the visor, which reflects Neil Armstrong standing between the American flag and the lunar module. Inscriptions on this face include but are not limited to “HALF DOLLAR, ” which is within the visor, and “UNITED STATES OF AMERICA, ” which is on the top portion of the helm. Memorializing the Role of Former President John F. Kennedy in America&#####x2019;s Space Program. The obverse of the Kennedy Clad Half Dollar in this set, features the titular 35th President of the United States in a striking enhanced reverse proof finish. On the reverse of the Kennedy Half Dollar is the Presidential Seal of the United States, albeit slightly modified. Stunning GEM FDI with Moon Core Holder. Numismatic Guaranty Corporation (NGC) certified that both of the coins from this set are in GEM condition and labeled them First Day of Issue. The First Day of Issue certification is only given to coins that were submitted to NGC through an exclusive process. The coin has been set in a moon core, which looks like the lunar surface and is offered with a reproduction of the Apollo 11 Mission Patch! Specifications for this 2019-S Apollo 11 50th Anniversary 2-Coin Commemorative Clad Half Dollar Proof + Enhanced Reverse Proof Set NGC PF70 FDI With Apollo 11 Mission Patch Moon Core Holder SKU56551. First Day of Issue. With Apollo 11 Mission Patch. We cannot make any price adjustments after the sale is complete. Product Photo Policy: MCM attempts to display product images shown on the site as accurately as possible. We take all of our photos in house and due to reflections on the mirrored or proof surfaces of a coin there may appear to be’black’ when there is not. If a coin has a color on it at all it will be described as’colorized’ in the description or title. Due to the large inventory we sell, we use stock photos. Serial numbers will vary from the image shown unless specifically stated in the product listing that the item pictured is the item you will receive. INTERNATIONAL ORDERS POLICY: We are accepting international orders from select countries. These charges are the customer’s responsibility. However, we cannot guarantee this due to the volume of orders we process each day. Beyond the 30-day return period, Company is under no obligation to accept return of any product, but may in its discretion do so pursuant to this policy, for up to one year from the invoice date. ModernCoinMart (MCM) was launched in 2004 and quickly set the standards for online sales of bullion, US coins and world coins. Join over 100,000 loyal customers and feel confident purchasing from a company that’s spent a decade building a solid and stellar reputation trusted and recognized around the world. That’s the MCM way. View more great items. Roll-40 2018 S Silver Quarters America Beautiful Cumberland Island Reverse Proof. 2018-S Silver Block Island Reverse Proof ATB Quarter GEM SKU55242. Roll of 40 US 2018 S 25C Silver Voyageurs NP Reverse Proof ATB Quarter GEM Proof. S 2018-S Silver Apostle Islands Reverse Proof ATB Quarter GEM SKU55239. This listing is currently undergoing maintenance, we apologise for any inconvenience caused. The item “2019 S Apollo 11 Clad Half Dollar Enhanced Set NGC PF70 FDI Moon Core SKU56551″ is in sale since Wednesday, March 6, 2019. This item is in the category “Coins & Paper Money\Coins\ US\Commemorative\Modern Silver/Clad (1982-Now)”. The seller is “mcm” and is located in Sarasota, Florida. This item can be shipped worldwide.