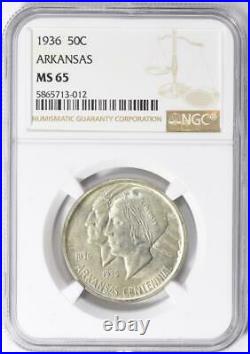 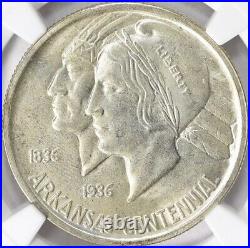 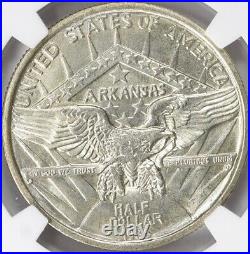 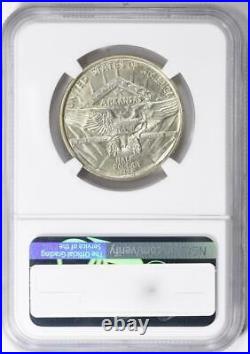 Capped Bust Half Dollars. Liberty Walking Half Dollars. Liberty Head Quarter Eagles. Indian Head Quarter Eagles. Add to Favorite Sellers. Sign up to Newsletter. 1936 Arkansas Commemorative Silver Half Dollar NGC MS-65 – Mint State 65. Offered here is a 1936 Arkansas Commemorative Half Dollar. It is graded by NGC as MS-65. The coin in the above pictures is the one you will receive. Commemorative coins were authorized to celebrate the 100th anniversary of the admission of Arkansas into the Union. The Arkansas Centennial Half Dollars ended up being issued during five separate years, across three different mints. The coins became controversial due to the stream of variations created specifically to market to collectors, as well as the escalating issue prices as mintage for later issues became smaller. The obverse design features the head of Liberty and a Native American in headdress. The centennial dates “1836” and “1936” appear, along with the inscription “Arkansas Centennial” below and “Liberty” on Liberty’s cap. Although this is now considered to be the obverse of the coin, there was initially some confusion and US Mint records and some references refer to this side as the reverse. In 1936, a new design was issued for this side of the coin, featuring a Senator who was living at the time of issue. The 1936 Robinson-Arkansas half dollar is considered a separate issue by most collectors. The reverse of the coin features the image of an eagle with wings spread, perched on the rising sun with rays emanating upwards. In the background a geometrical shape appears with the word “Arkansas” at center, amidst an arrangement of stars. The further inscriptions read “United States of America”, “In God We Trust”, “E Pluribus Unum”, “Half Dollar”, and the date of issue. Both the obverse and reverse design designed by Edward Everett Burr, following models prepared by Emily Bates. At the onset, the Arkansas Half Dollar was struck in a modest quantity of 13,012 pieces at the Philadelphia Mint with an additional 5,505 from Denver and 5,506 from San Francisco. This initial situation was a taste of things to come. This would also be the price of the 1939 sets. The centennial had been celebrated for a five year period including one year prior to the actual anniversary date. Arkansas Centennial Half Dollar Coin Specifications. Designer: Edward Everett Burr Composition: 90% silver, 10% copper Weight: 12.50 grams Diameter: 30.6 mm Authorization: Public Law 73-225 Maximum Authorized Mintage: 500,000. Arkansas Centennial Half Dollar Mintages. 1935: 13,012 1935-D: 5,005 1935-S: 5,006. 1936: 9,660 1936-D: 9,660 1936-S: 9,662. 1937: 5,505 1937-D: 5,505 1937-S: 5,506. 1938: 3,156 1938-D: 3,156 1938-S: 3,156. 1939: 2,104 1939-D: 2,104 1939-S: 2,105 Â. Whether you are an investor seeking asset diversification, an experienced collector searching for a key date coin, or simply trying to find a vintage Proof Set as a gift, Woodland Treasure is available to meet your needs. The rate varies by state. If you need to change the Address you should cancel your order and place a new order using the correct address. Our goal is to provide outstanding customer service, we strive to respond to your inquiries within 24 hours. View more great items. 1935/34 Boone Silver Commemorative Half Dollar PCGS MS-66 CAC. 1939-S Oregon Trail Commemorative Silver Half Dollar – PCGS MS-63 – CAC. 1937-D Boone Commemorative Silver Half Dollar – NGC MS 65 -Low Mintage. 1938-S Boone Silver Commemorative Half Dollar NGC MS-66 CAC. This listing is currently undergoing maintenance, we apologise for any inconvenience caused. The item “1936 Arkansas Commemorative Silver Half Dollar NGC MS-65 Mint State 65″ is in sale since Thursday, February 4, 2021. This item is in the category “Coins & Paper Money\Coins\ US\Commemorative\Silver (1892-1954)”. The seller is “woodlandtreasure” and is located in Baileyville, Maine. This item can be shipped worldwide.