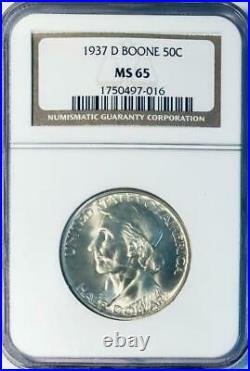 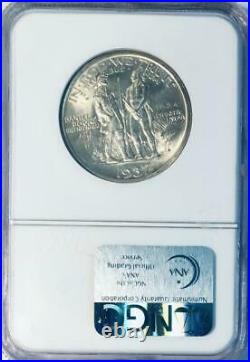 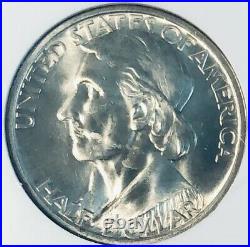 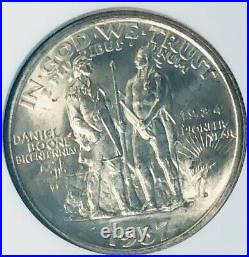 Capped Bust Half Dollars. Liberty Walking Half Dollars. Liberty Head Quarter Eagles. Indian Head Quarter Eagles. Add to Favorite Sellers. Sign up to Newsletter. 1937-D Boone Commemorative Silver Half Dollar – NGC MS 65 -Low Mintage. Offered here is a 1937-D Boone Commemorative Half Dollar. It is graded by NGC as MS-65. The coin in the above pictures is the one you will receive. The Daniel Boone Half Dollar was minted to celebrate the 200th anniversary of the birth of the famous frontiersman, explorer, and folk hero. Originally, the coins were struck at the Philadelphia Mint to coincide with the bicentennial year. During the next four years, the coins would continue to be struck, across three different mint facilities. On the obverse of the coin is a portrait of Daniel Boone. Since no known portraits of him exist, this is an artists conception created by Augustus Lukemann. The likeness looks decidedly different than the portrait of Boone, which had appeared on the previous1921 Missouri Centennial Half dollar. The inscriptions surrounding the portrait include “United States of America” and “Half Dollar”. The reverse of the coin features a scene of the frontiersman holding a chart of Kentucky and a musket, facing an American Indian holding a tomahawk. In the background a blockhouse stockade and a sun with rays appear. This was also designed by Augustus Lukemann. The inscriptions read “In God We Trust”, “E Pluribus Unum”, “Daniel Boone Bicentennial Pioneer Year”, and the date of issue. In the following year, additional coins were struck at the Philadelphia, Denver, and San Francisco Mints carrying the 1935 date. Subsequent to the initial distribution, legislation was passed in Congress stipulating that the original design should be supplemented by adding the bicentennial year “1934” to the reverse of the coin. A smaller number of coins were minted with the “small 1934 on reverse” and came to represent a scarce variety. More coins continued to be minted and issued in 1936, 1937, and 1938. The final two years would have smaller net distribution levels as collectors began to grow weary of the endless string of varieties of the commemorative coin, issued years after the actual bicentennial. Daniel Boone Bicentennial Half Dollar Coin Specifications. Designer: Augustus Lukemann Composition: 90% silver, 10% copper Weight: 12.50 grams Diameter: 30.6 mm Authorization: Public Law 73-258 Maximum Authorized Mintage: 600,000. Daniel Boone Bicentennial Half Dollar Mintages. 1935: 10,010 1935-D: 5,005 1935-S: 5,005. 1935, small 1934 on reverse: 10,008 1935-D, small 1934 on reverse: 2,003 1935-S, small 1934 on reverse: 2,004. 1936: 12,012 1936-D: 5,005 1936-S: 5,006. 1937: 9,810 1937-D: 2,506 1937-S: 2,506. 1938: 2,100 1938-D: 2,100 1938-S: 2,100. Whether you are an investor seeking asset diversification, an experienced collector searching for a key date coin, or simply trying to find a vintage Proof Set as a gift, Woodland Treasure is available to meet your needs. The rate varies by state. If you need to change the Address you should cancel your order and place a new order using the correct address. Our goal is to provide outstanding customer service, we strive to respond to your inquiries within 24 hours. View more great items. 1938-S Boone Silver Commemorative Half Dollar NGC MS-66 CAC. 1946 Iowa Silver Commemorative Half Dollar – PCGS MS-65. 1946 Iowa Commemorative Silver Half Dollar – PCGS MS-64 – Toned. 1934 Maryland Commemorative Silver Half Dollar – ANACS Mint State 65- MS-65. This listing is currently undergoing maintenance, we apologise for any inconvenience caused. The item “1937-D Boone Commemorative Silver Half Dollar NGC MS 65 -Low Mintage” is in sale since Sunday, January 31, 2021. This item is in the category “Coins & Paper Money\Coins\ US\Commemorative\Silver (1892-1954)”. The seller is “woodlandtreasure” and is located in Baileyville, Maine. This item can be shipped worldwide.