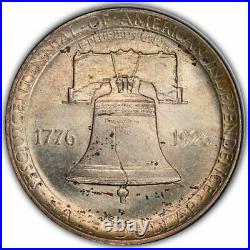 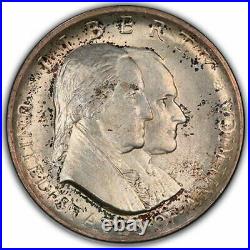 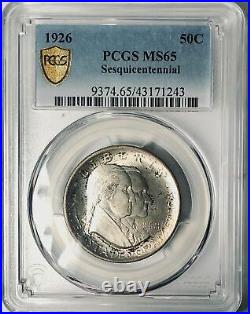 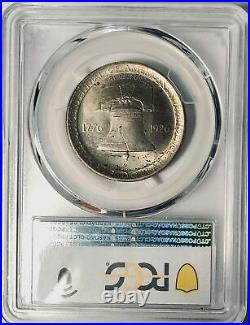 Capped Bust Half Dollars. Liberty Walking Half Dollars. Liberty Head Quarter Eagles. Indian Head Quarter Eagles. Add to Favorite Sellers. Sign up to Newsletter. 1926 Sesquicentennial Silver Half Dollar Commemorative – PCGS MS-65. Offered here is a 1926 Sesquicentennial Commemorative Half Dollar. It is graded by PCGS MS-65. The coin in the above pictures is the one you will receive. 1926 Sesquicentennial of American Independence Half Dollar. This was one of two commemorative coins issued for the 150th anniversary of the signing of the Declaration of Independence. The obverse of the coin features the busts of George Washington and Calvin C. Th latter was the President at the time of issue and represented the first time that a U. President appeared on a coin during his lifetime. Inscriptions surrounding read “Liberty”, “United States of America”, and “In God We Trust”. On the reverse of the coin is an image of the Liberty Bell with the anniversary dates “1776” and “1926” to each side. The remaining inscriptions read “Sesquicentennial of American Independence” and “Half Dollar”. This reverse design by John R. Sinnock would later be used for the series of Franklin Half Dollars issued from 1948 to 1963. The Sesquicentennial Half Dollars were authorized in a quantity of up to one million coins. In anticipation of widespread demand the entire amount was struck at the Philadelphia Mint. The remaining amount was melted. Ironically, the initial unpopularity of the design which led to low sales, now makes this one of the more valuable commemorative coins due to the low resulting mintage. American Sesquicentennial Half Dollar Coin Specifications Designer: John R. Sinnock Composition: 90% silver, 10% copper Weight: 12.50 grams Diameter: 30.6 mm Authorization: Public Law 68-62 Maximum Authorized Mintage: 1,000,000 American Sesquicentennial Half Dollar Mintage 1926: 141,120. Whether you are an investor seeking asset diversification, an experienced collector searching for a key date coin, or simply trying to find a vintage Proof Set as a gift, Woodland Treasure is available to meet your needs. The rate varies by state. If you need to change the Address you should cancel your order and place a new order using the correct address. Our goal is to provide outstanding customer service, we strive to respond to your inquiries within 24 hours. View more great items. 1924 Huguenot Commemorative Silver Half Dollar – NGC MS-66 – Original Surfaces. 1935-D Texas Silver Commemorative Half Dollar – NGC MS-67 CAC -Mint State 67 CAC. 1938 New Rochelle Silver Commemorative Half Dollar – NGC MS-67 CAC. $1,090.00. 1936 York Silver Commemorative Half Dollar – NGC MS-67 CAC – Mint State 67 CAC. This listing is currently undergoing maintenance, we apologise for any inconvenience caused. This item is in the category “Coins & Paper Money\Coins: US\Commemorative\Silver (1892-1954)”. The seller is “woodlandtreasure” and is located in this country: US. This item can be shipped to United States.