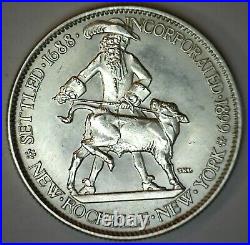 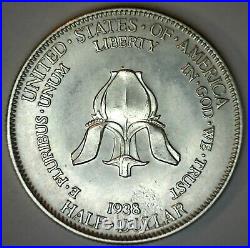 The 1938 New Rochelle Half Dollar was one of several early commemorative issues that celebrated an event of primarily local significance with the issuance of a coin on a national scale. These coins were conceived and planned by the Westchester County Coin Club of New Rochelle, New York. Initially, Lorrilard Wise was engaged to prepare the designs for the coin. Her first models featured a Native American crouching in the grass and watching a boat carry settlers to the shore on the obverse, and the city seal on the reverse. The Commission of Fine Arts rejected the designs, recommending changes, which were executed and also rejected. Eventually, Gertrude Lathrop, who had designed the 1936 Albany Half Dollar, was engaged to prepare new designs for the New Rochelle Half Dollar. Her obverse design would depict John Pell and a fatted calf, which recalls the sale of the original land upon which the city now stands. One of the conditions of the sale was for Pell or his heirs to receive a fatted calf each year on June 24. Obverse inscriptions around the border include “Settled 1688″, “Incorporated 1899″, and “New Rochelle, New York”. The reverse design features the fleur-de-lis, taken from the seal of the city. Similar to the obverse, the single design element is presented in a flat and open field with sharply contrasted lettering. The inscriptions read “United States of America”, “Half Dollar”, “E Pluribus Unum”, “Liberty”, “In God We Trust”, and the date “1938”. Authorizing legislation provided that the coins should be dated 1938, without regard to when the coins were actually minted. The Philadelphia Mint struck the entire amount in 1937. New Rochelle Half Dollar Coin Specifications. Composition: 90% silver, 10% copper. Weight: 12.50 grams. Diameter: 30.6 mm. 1936 New Rochelle Half Dollar Mintage: 15,266. This item is in the category “Coins & Paper Money\Coins: US\Commemorative\Silver (1892-1954)”. The seller is “wintercoins” and is located in this country: US. This item can be shipped worldwide.