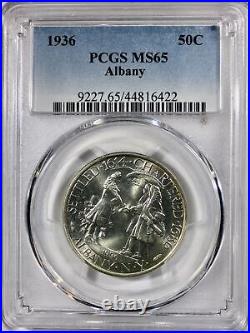 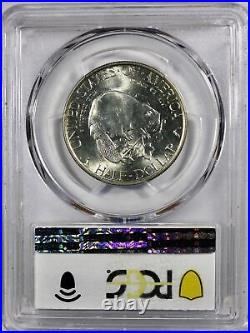 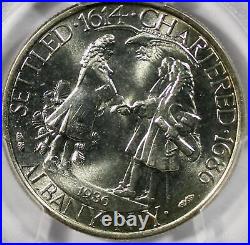 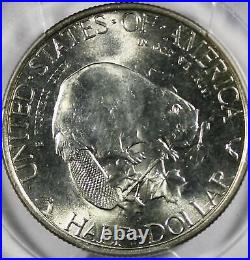 Capped Bust Half Dollars. Liberty Walking Half Dollars. Liberty Head Quarter Eagles. Indian Head Quarter Eagles. Add to Favorite Sellers. Sign up to Newsletter. 1936 Albany Silver Commemorative Half Dollar – PCGS MS-65 – Mint State 65. Offered here is a 1936 Albany Commemorative Half Dollar. It is graded by PCGS as MS-65. The coin in the above pictures is the one you will receive. 1936 Albany Half Dollar. Another local anniversary was celebrated with the issuance of a commemorative coin. The 1936 Albany Half Dollar was issued to mark the 250th anniversary that a charter was granted to the city of Albany, New York. The designs for the coin are viewed favorably by collectors, particularly the obverse which features a beaver gnawing on a maple branch. The designer of the coin Gertrude Lathrop had a live beaver in her studio at the time the coin was being designed. The obverse inscriptions include “United States of America”, “E Pluribus Unum”, “In God We Trust”, and “Half Dollar”. The reverse of the Albany Half Dollar depicts Colonial Governor Sir Thomas Dongan presenting a charter to Peter Schuyler, Albany’s first mayor, and Robert Livingston. An eagle in flight appears above the scene. The inscriptions read “Settled 1614″, “Chartered 1686″, “1936”, and Albany N. Despite a request for a maximum authorized mintage of 10,000 pieces, the legislation set the issue at 25,000 pieces, which were all struck at the Philadelphia Mint. At the time the coins were being released, the public’s enthusiasm for commemorative coin issues had faded, amidst the flood of new issues and certain abuses of the program. Sales progressed more slowly than expected and remained on sale for more than six years. The net distribution for the issue was 17,671. Albany Half Dollar Coin Specifications Designer: Gertrude Lathrop Composition: 90% silver, 10% copper Weight: 12.50 grams Diameter: 30.6 mm Authorization: Public Law 74-687 Maximum Authorized Mintage: 25,000 Albany Half Dollar Mintage 1936: 17,671. Whether you are an investor seeking asset diversification, an experienced collector searching for a key date coin, or simply trying to find a vintage Proof Set as a gift, Woodland Treasure is available to meet your needs. The rate varies by state. If you need to change the Address you should cancel your order and place a new order using the correct address. Our goal is to provide outstanding customer service, we strive to respond to your inquiries within 24 hours. View more great items. 1925 Vancouver Commemorative Silver Half Dollar- PCGS MS 65 – Mint State 65. $1,199.00. 1936 York Silver Commemorative Half Dollar -PCGS MS-64 – Mint State 64. 1926 Sesquicentennial Silver Half Dollar Commemorative – PCGS MS-65. $1,059.00. 1936-S Rhode Island Commemorative Half Dollar NGC MS-67 – Mint State 67. $1,239.00. This listing is currently undergoing maintenance, we apologise for any inconvenience caused. This item is in the category “Coins & Paper Money\Coins: US\Commemorative\Silver (1892-1954)”. The seller is “woodlandtreasure” and is located in this country: US. This item can be shipped worldwide.