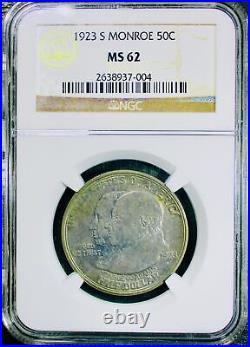 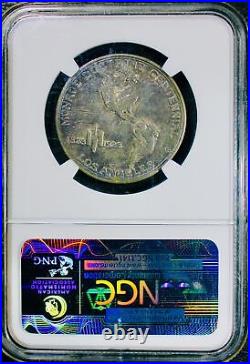 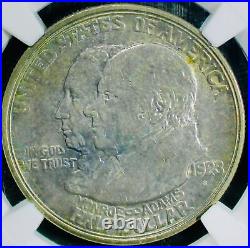 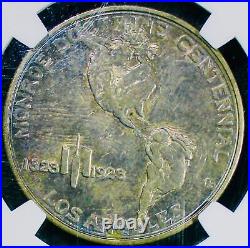 Capped Bust Half Dollars. Liberty Walking Half Dollars. Liberty Head Quarter Eagles. Indian Head Quarter Eagles. Add to Favorite Sellers. Sign up to Newsletter. 1923-S Monroe Doctrine Silver Commemorative Half Dollar – NGC MS-62. Offered here is a 1923-S Monroe Doctrine Commemorative Half Dollar. It is graded by NGC as MS-62. The coin in the above pictures is the one you will receive. The 1923 Monroe Doctrine Centennial Half Dollar was promoted by the California film industry in connection with the First Annual Historical Revue and Motion Picture Film Industry Exposition. The topic of the coin was the 100th anniversary of the Monroe Doctrine, which stated that efforts of European countries to interfere or establish new colonies in the west would be viewed as acts of aggression. The Doctrine had a long standing impact on U. The obverse design of the Monroe Doctrine Half Dollar features portraits of James Monroe and John Quincy Adams, who were both instrumental in formulating the Doctrine. United States of America? In God We Trust? The date of issue? Depicted on the reverse are two female forms in shapes resembling North and South America. This image is said to have copied from a medal created by Ralph Beck in 1899 of the same theme. The artist and medalist Chester Beach is generally credited with the designs for the obverse and reverse of the coin. With the dual date? The later inscription was the only reference to the exposition for which the coins were to be issued. A vast number of the mintage was eventually released into circulation at face value. Nearly all examples of this issue will be encountered with shallow strikes and characteristically unattractive surfaces. Higher grade mint state examples with an attractive appearance are extremely elusive. Monroe Doctrine Centennial Half Dollar Coin Specifications. Designer: Chester Beach Composition: 90% silver, 10% copper Weight: 12.50 grams Diameter: 30.6 mm Authorization: Public Law 67-391 Maximum Authorized Mintage: 300,000. Monroe Doctrine Half Dollar Mintages. Whether you are an investor seeking asset diversification, an experienced collector searching for a key date coin, or simply trying to find a vintage Proof Set as a gift, Woodland Treasure is available to meet your needs. The rate varies by state. If you need to change the Address you should cancel your order and place a new order using the correct address. Our goal is to provide outstanding customer service, we strive to respond to your inquiries within 24 hours. View more great items. 1918 Lincoln Silver Commem Half Dollar – NGC MS-67 – Mint State 67. $2,279.00. 1924 Huguenot Silver Commemorative Half Dollar NGC MS-63 – Mint State 63. 1926-S Oregon Trail Silver Commemorative Half Dollar – PCGS MS-67 – Bingham. $1,379.00. 1922 Grant Commemorative Silver Half Dollar – NGC MS-65 – Great Color. $2,100.00. This listing is currently undergoing maintenance, we apologise for any inconvenience caused. This item is in the category “Coins & Paper Money\Coins: US\Commemorative\Silver (1892-1954)”. The seller is “woodlandtreasure” and is located in this country: US. This item can be shipped to United States.